Emotional intelligence or EI is the ability to understand and manage your own emotions, and those of the people around you. The term was coined in 1990 in a research paper by two psychology professors, John D. Mayer of UNH and Peter Salovey of Yale. Some years later, Mayer described it in Harvard Business Review:

American psychologist Daniel Goleman is credited with popularizing the concept of emotional intelligence, and being the first to talk about it in the context of business leadership. In 1998, in a Harvard Business Review article entitled, “What Makes a Leader,” he explains:

“The most effective leaders are all alike in one crucial way: they all have a high degree of what has come to be known as emotional intelligence. It’s not that IQ and technical skills are irrelevant. They do matter, but…they are the entry-level requirements for executive positions. My research, along with other recent studies, clearly shows that emotional intelligence is the sine qua non of leadership. Without it, a person can have the best training in the world, an incisive, analytical mind, and an endless supply of smart ideas, but he still won’t make a great leader.”

Now, decades later, one’s EQ, or Emotional Quotient Score, has become almost as well-known as the IQ (Intelligence Quotient) – and in some circles, it’s considered even more important.

Not only does strong emotional intelligence lead to greater personal interactions, but it also lays the foundation for skills linked to job performance and career success.    Tweet This!

It’s no stretch to believe that having a high degree of emotional intelligence is essential for leaders to succeed. After all, who is more likely to drive a successful effort – a leader who shouts at his team when he’s under stress, or a leader who stays in control, and calmly assesses the situation?

Here are the 5 key elements of emotional intelligence, as identified by Goleman:

For some leaders, emotional intelligence may seem to come naturally, almost like an extension of their innate temperament. But in reality, every leader has a tougher time with some of these elements than with others. And anyone who has ever been in a leadership role knows that there are times when it can be extremely challenging to attend to all of these five elements at once. It can be tough to put one’s own emotions into perspective, exercise self-control, and demonstrate empathy while simultaneously motivating others enough to keep the organization on track on a daily basis. 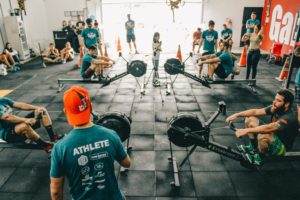 Just as we have to work at staying physically fit, we need to continually strive to build our emotional muscles in order to maintain a high level of emotional intelligence. Luckily, there are specific tasks, or exercises, that can be conducted to help gain strength in each of the five areas identified. One practice that can help build muscle with all five elements is an authentic inquiry, an approach to learning which begins with the learner’s interest and experience, moving gradually toward publicly agreed-upon assessment criteria.

The process of authentic inquiry is bottom-up, rather than top-down. It can be led by an individual or participated in by a team. We engage in this process every time we investigate something that we are naturally curious about. The process begins with observation, moving into questioning, which eventually leads to a subjective sense of narrative about the person, place or thing that we find fascinating. Eventually, that narrative gives way to a more objective knowledge map that can be used to make meaning of existing information and connect it to a wider body of knowledge (e.g. scientific, historical, social, psychological, theological, philosophical, etc.).

Authentic inquiry is inherently collaborative and conversational, as it recognizes the power of language in learning and knowledge.

When people are provided with a forum to practice authentic inquiry in the workplace by asking questions and investigating topics of interest, it facilitates understanding and openness to change.  Tweet This!

This practice develops emotional intelligence throughout the entire organization, and paves the way for a different type of leadership – one that is based on trust and mutual respect, rather than outmoded methods of autocratic management.

Another practice that can help develop emotional intelligence is an authentic conversation. Human relationships are built on communication. But in the workplace, leaders often don’t have time to get into authentic and meaningful conversations. In order to shape strong bonds, leaders need to go beyond the superficial and really listen to their people.

Organizations can foster a conversational culture by implementing a platform for authentic 2-way dialogue. According to Harvard Business School, Professor Boris Greysberg, the nimbleness and agility of smaller companies is less a function of their size, but rather of their conversational nature. One of the benefits of implementing conversation-like practices is the ability to speed up decision making. This enables an organization to achieve higher degrees of trust and improved operational efficiency. As Groysberg puts it in his book, Talk Inc., “It’s energy … It’s fuel. In organizational terms, conversation is what keeps the engine of value creation firing on all cylinders.”

Here’s the formula for success: Authentic Inquiry X Authentic Conversation = Aligned Insights. Great leadership requires a mix of passion, resilience, grit, and astute sensitivity. The more that you, as a leader, manage each of these areas, the higher your emotional intelligence. By asking questions and allowing people to share authentic input, you raise the EQ of all the individuals that comprise your organization, putting everyone on the path to betterment.

Does your organization want to develop a stronger alignment? Waggl can help by providing an easy and efficient way to implement authentic inquiry and authentic conversation by crowdsourcing employee voices in a transparent and inclusive way. If you are interested in learning more, please get in touch for a demo today.

How it Works Request a Demo